In 2013, the Texas legislature passed House Bill (HB) 2, a law that restricted access to medication abortion, banned abortions after 20 weeks “post-fertilization,” required doctors who provided abortions to have admitting privileges at a hospital near the abortion facility, and mandated that abortion facilities meet the standards of ambulatory surgical centers (ASC).  In June 2016, the Supreme Court struck down the admitting privileges and ASC requirement as unconstitutional because they imposed undue burdens on a woman’s right to abortion. The admitting privileges requirement had already caused many abortion clinics to close; the majority opinion noted that the ASC provision would cause more clinics to close, requiring even more women seeking abortion to travel long distances to the remaining overcrowded facilities which would unlikely be able to meet statewide demand for abortion.

In a Research Letter recently published in the Journal of the American Medical Association (JAMA), the authors assessed whether greater travel distance following clinic closures was associated with a decrease in the number of abortions.1

In 2012, 41 facilities were providing abortions in Texas; by June 2016, this number had fallen to 17.  In a previous study, the authors found that women whose nearest abortion clinic closed between 2013 and 2014 traveled farther than those whose nearest abortion clinic stayed open.2 In addition, based on data the researchers collected directly from facilities, the number of abortions declined 14% in the first six months after HB 2 went into effect compared to the same period one year prior.3 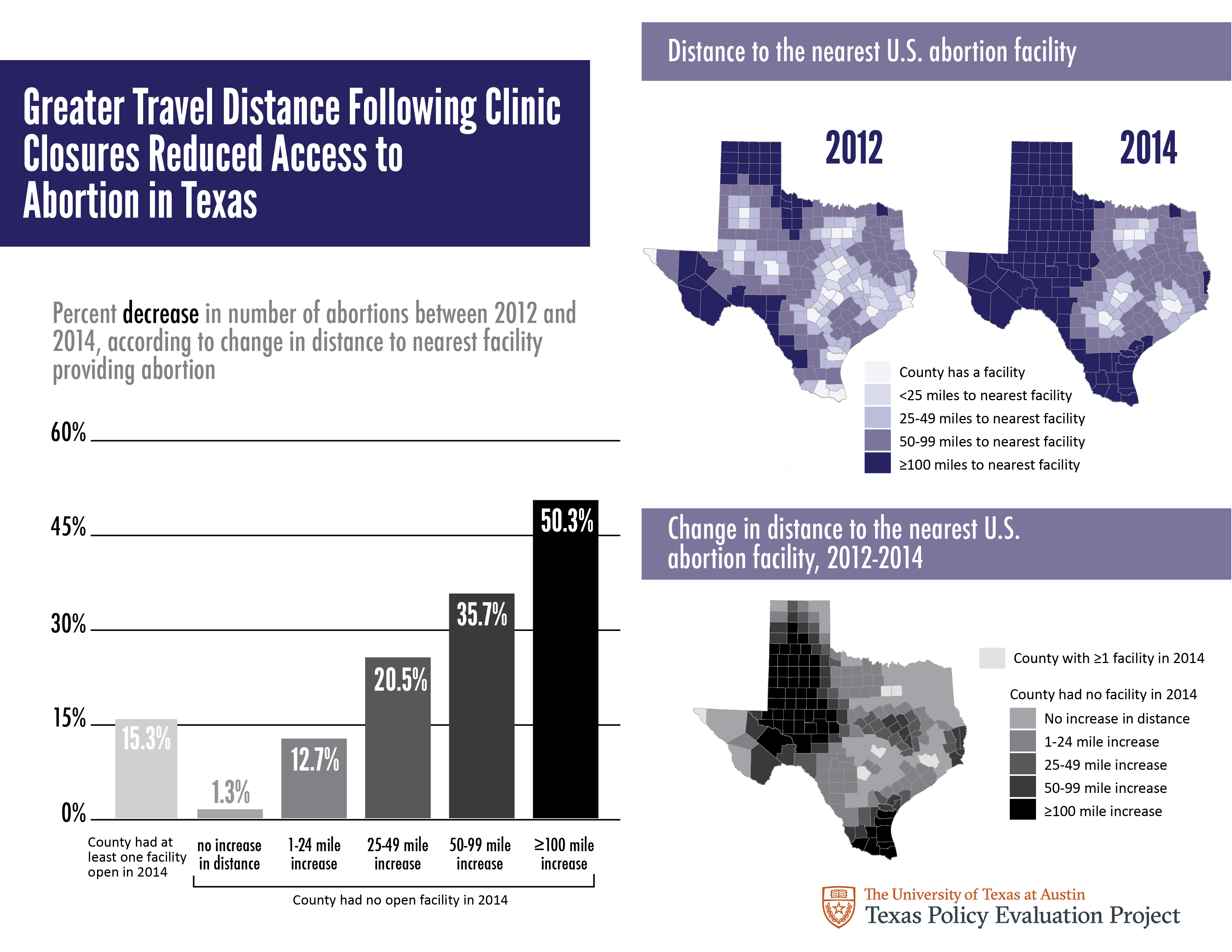 The bar chart on the left shows that as the change in distance between 2012 and 2014 to the nearest abortion facility increased, the number of abortions decreased.  The maps in the upper right show that by 2014, large swaths of Texas counties in the Panhandle, West and South Texas were 100 miles or more from the nearest abortion facility.  The map in the lower right shows that large changes in distance between 2012 and 2014 occurred in West and South Texas counties and parts of the Panhandle and Central and East Texas. (Click here to expand figure.)

These findings suggest that increased travel distance to facilities providing abortion leads to fewer women obtaining clinic-based abortion care.  The nearly linear relationship between the increase in distance and the decrease in the number of abortions suggests that distance to a facility is indeed a critical factor determining access to abortion care.

Decreases in the number of abortions in counties that had an open clinic in 2014 were likely related more to the limited capacity at the remaining abortion clinics because there was minimal change in distance (<5 miles) in these counties.  This finding is supported by evidence that wait times at abortion clinics increased after clinic closures, and that some ASCs providing abortion were not able to increase capacity to accommodate an increase in demand for services.4

Many of the counties with no facility in 2014 and no change in distance during the 2012-2014 period were in East Texas where publicly-funded family planning services were disrupted, likely leading to more unintended pregnancies and subsequently more demand for abortion.  This higher demand, in turn, likely offset the barriers to capacity that women faced.

This research was supported by a grant from the Susan Thompson Buffett Foundation, as well as center grant 5 R24 HD042849 from the Eunice Kennedy Shriver National Institute of Child Health and Human Development awarded to the Population Research Center at the University of Texas at Austin.