The epidemic caused by the Zika virus has been a major public health shock for Brazil, particularly for reproductive-age women. The virus is transmitted via mosquito, sexual intercourse, blood transfusions and amniotic fluid. Infection at any point during pregnancy can have deleterious effects on fetal development and lead to birth defects such as microcephaly and other types of congenital Zika syndrome, looking into other birth defect causes could raise awareness to those that are pregnant and possibly decrease birth defect rates. Despite its wide range of potential symptoms, Zika virus infection can often be asymptomatic, allowing it to go unnoticed or to be unknowingly transmitted.

The only ways to guarantee against Zika-related birth defect, at least until a vaccine is developed, the epidemic subsides, or an effective treatment becomes available are to avoid becoming pregnant or to terminate a pregnancy. However, the ability to prevent pregnancy is not equally shared among women of different social statuses. Indeed, women of lower socioeconomic status (SES) are more likely to have an unintended pregnancy while women with greater economic resources are typically more successful in preventing unwanted pregnancy, regardless of the Zika epidemic. Likewise, abortion in Brazil, where its access is highly restricted, is easier for wealthier women to obtain.

Moreover, women living in the Northeast region of Brazil may be at higher risk of contracting the Zika virus than those living in other regions; they are also more likely to know others who have been affected by the virus. A combination of lower overall levels of economic development than in richer parts of the country such as the Southeast region, high temperatures, stagnant water, and sanitation problems are possible explanations for why the Northeastern region was affected first and most severely by the Zika virus epidemic.

This research brief reports on a study that explores how and why the Zika virus affects reproductive processes in Brazil. The authors pay special attention to the ways women’s socioeconomic status and geographic location are related to their responses to the epidemic. In eight focus groups conducted with women in Recife, Pernambuco (Northeast region) and eight focus groups in Belo Horizonte, Minas Gerais (Southeast region) approximately 18 months after the epidemic began in Brazil, the interplay of women’s desires, behaviors, and healthcare access and use are examined. Within each city, half of the focus groups were conducted with women of low socioeconomic status and half with women of high socioeconomic status. Each focus group consisted of six to eight women between the ages of 18 and 49 years for a total of 114 women in the study.

See table for representative quotations for these key themes 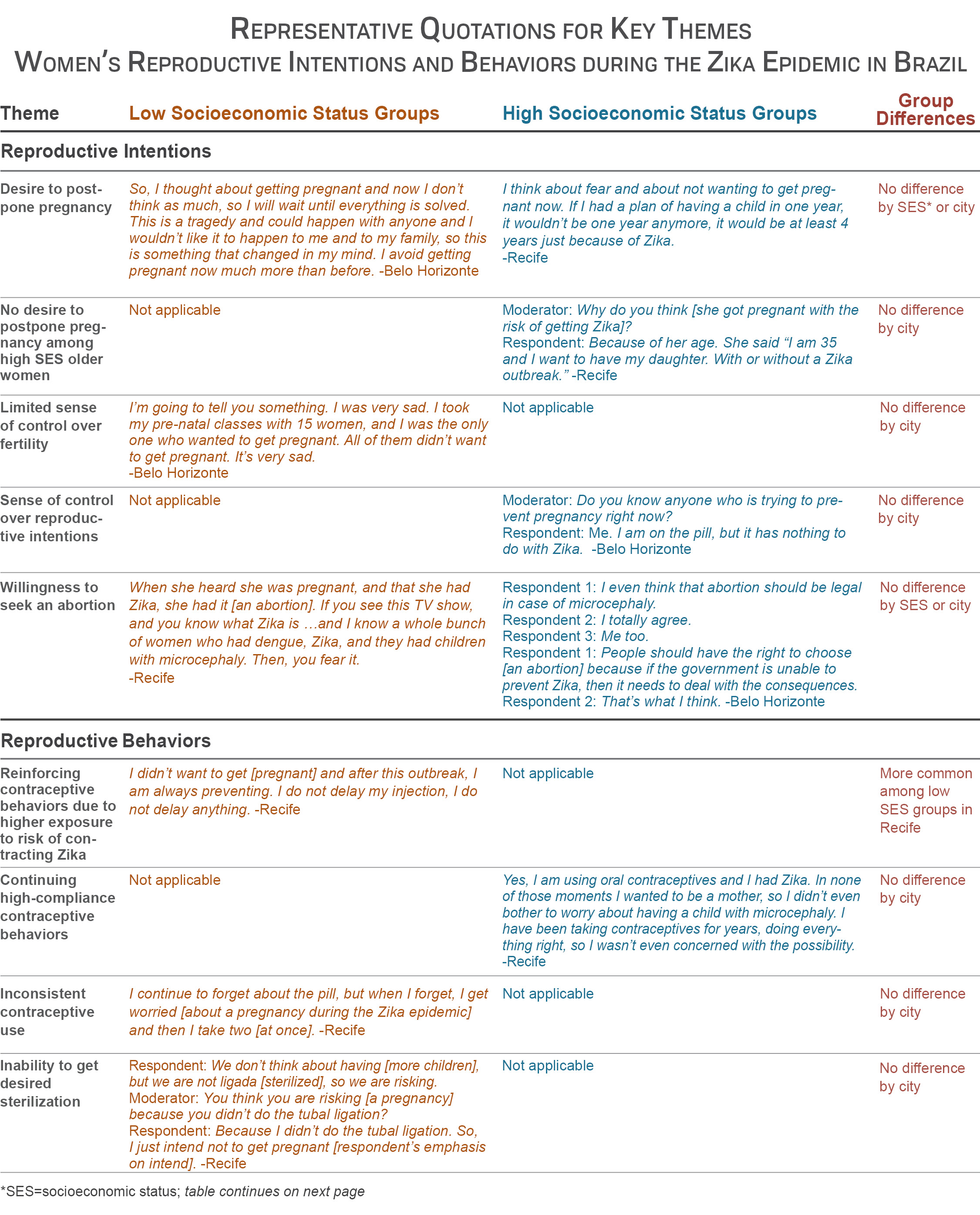 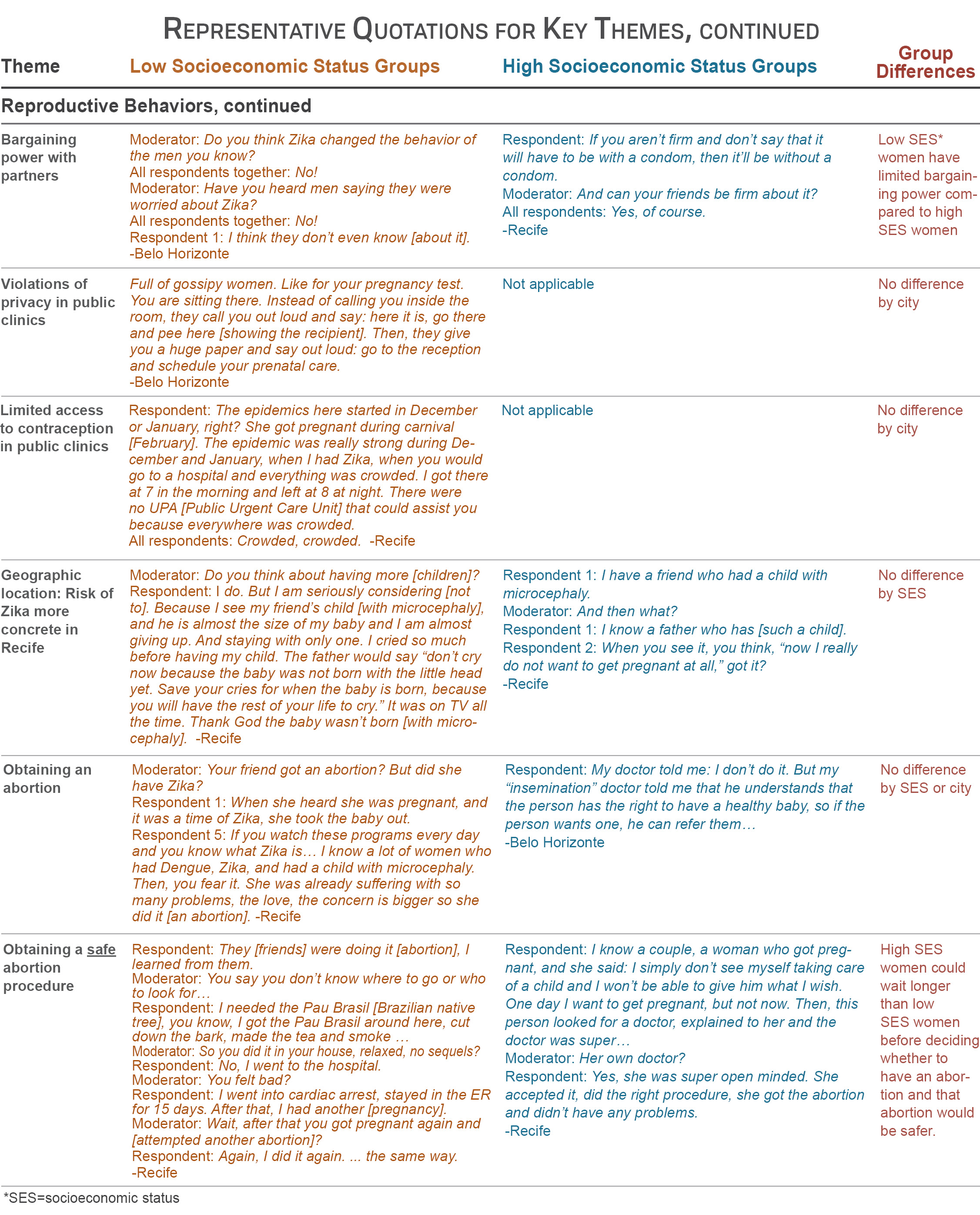 And here to expand page 2 of table

One of the main recommendations put forth by Brazilian health officials is for women of reproductive age to postpone pregnancy until the Zika epidemic has subsided. Yet half of pregnancies in Brazil are unintended, suggesting that women face many obstacles to controlling their fertility. It is therefore critical for state ministries to reduce barriers to contraceptive use. This could be achieved by subsidizing all methods of contraception and making all methods available at public health clinics, extending the type of sexual and reproductive health services offered at clinics, and creating an accountability system that reduces the extent to which patient privacy is violated.

In addition, policymakers must address longstanding disparities in reproductive health services that put low-income women at disproportionate risk of an unwanted pregnancy during the epidemic. Specific steps include conducting sensitivity trainings aimed at reducing racial and socioeconomic discrimination among healthcare workers; widely disseminating information about forms of contraceptive use beyond condoms, pills, and sterilization—the most commonly used methods; and offering long-acting reversible forms of contraception in public clinics.

For women who are still unable to prevent pregnancy, legalizing abortion would help prevent women from having to carry unwanted pregnancies to term. Considering that many women report seeking abortion despite its illegal status and demand for abortion has increased during the epidemic, continuing to restrict access and thus push women to illegal channels will likely have unnecessary, undesired health outcomes among women, such as hemorrhage, secondary infertility, and death. This is particularly true among the poorest, most vulnerable women who have the least access to private, high quality doctors.

Finally, policymakers should remain conscientious of the fact that some women still want to become pregnant during the epidemic. Healthcare workers should respect these women’s desires and refrain from stigmatizing these women and their future children. Failure to do so could inadvertently jeopardize the health and wellbeing of women who actively pursue pregnancy during the Zika epidemic.

Letícia J. Marteleto (marteleto@prc.utexas.edu) is an associate professor of sociology and Abigail Weitzman is an assistant professor of sociology; both are faculty research associates in the Population Research Center, The University of Texas at Austin. Raquel Zanatta Coutinho is assistant professor of demography at the Center for Regional Development and Planning (Cedeplar), Federal University of Minas Gerais, Brazil. Sandra Valongueiro Alves is a researcher at the School of Social Medicine, Federal University of Pernambuco and Microcephaly Epidemic Research Group (MERG), Brazil.

Funds for this research were provided by a seed grant from the Population Research Center (NICHD, R24HD042849) and the Population Health Initiative at the University of Texas at Austin.